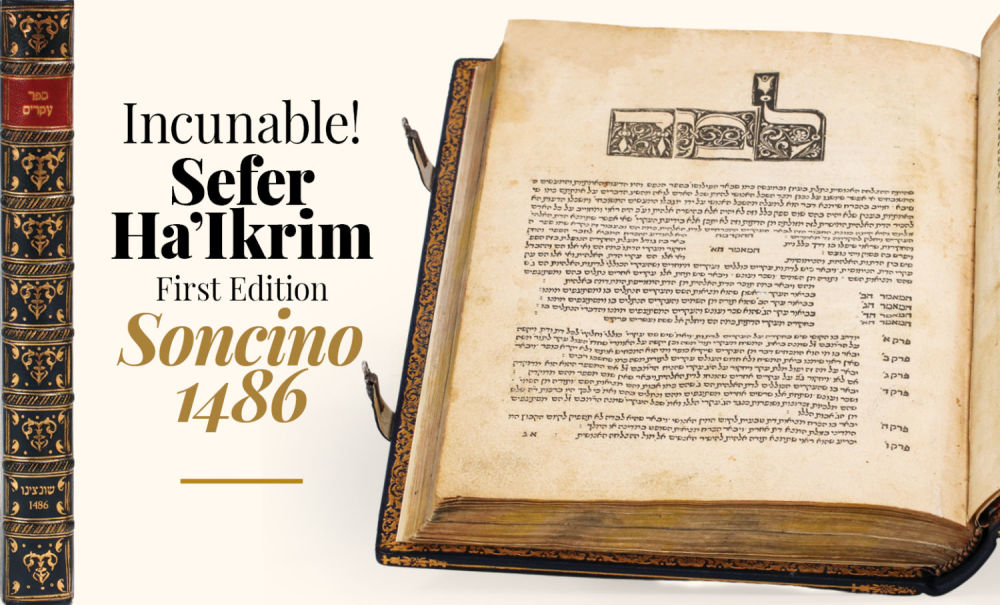 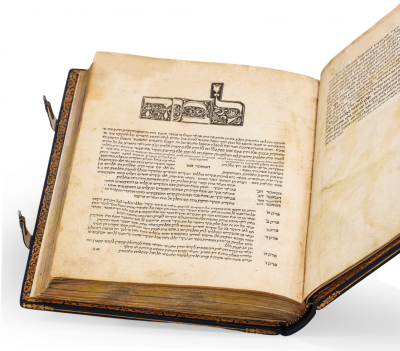 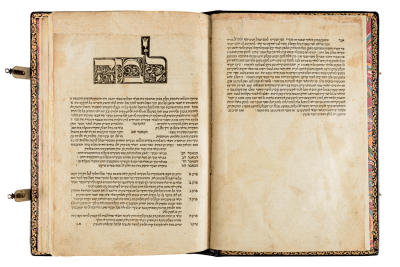 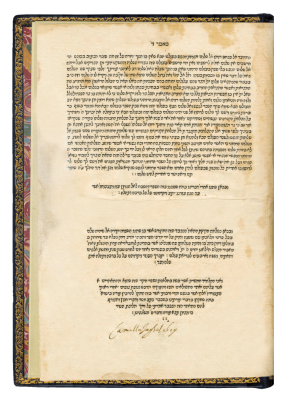 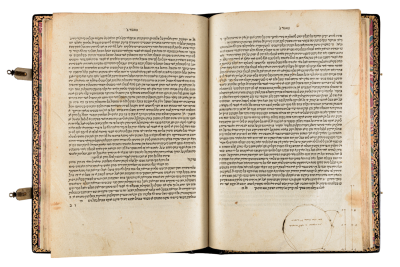 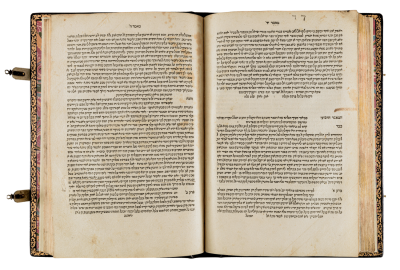 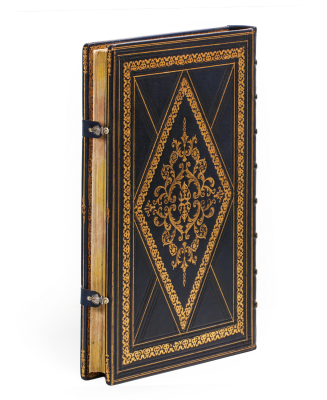 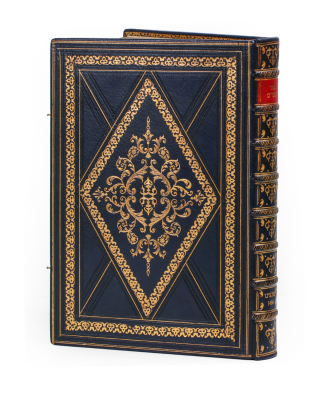 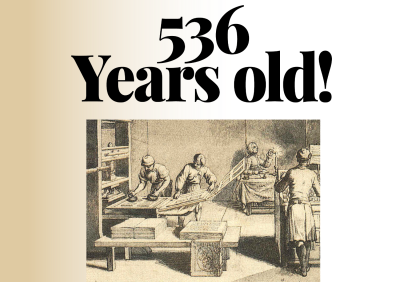 Complete copy in good condition with an ornate new binding.

In the course of delineating these principles, the author presents a lengthy explanation of the essence of prayers on Rosh Hashanah, the beginning of the High Holy Days:

Malchuyos: Symbolizes the Existence of Hashem

Leaves 56-68 (Kuntress 8, Leaves 2-4) of this sefer contain virulent criticism against Christianity, and as a result, these pages were removed by the European censors in the majority of existing copies of Sefer Ha’Ikrim. Amazingly, the present copy endured over half a millennia with all pages intact.

Rabbi Yosef Albo (circa 1380–1444) was a 15th century Spanish Rabbi, scholar and philosopher who was a disciple of Rabbi Chasdai Crescas, talmid of the Ran and author of Ohr Hashem. Rabbi Yosef authored this sefer in response to the brutal pogroms and bitter edicts of 1391 when all Jews in Spain were collectively ordered to convert to Christianity, in order to strengthen the suffering Jews spiritually during these difficult times.

This first edition copy of Sefer Ha’Ikrim was printed in a single column in block letters with headers and bookmarks. The first words of the introduction are printed as initials.

Sefer Ha’Ikrim features an introduction by Rabbi Yisrael Nosson Soncino, renowned as the Mechokek, who was the father of all Jewish printers (as described by Gershom Soncino in the subsequent Rimini edition of Sefer Ha’Ikrim (Rimini, 1628).

The end of the sefer features an interesting colophon that reads “…
It was completed here in Soncino in the country of Lombard under the government of…the Duke of Milan…on the twenty-first day of the month of Teves, Year 5246 to the creation of the world…For Torah will emerge from Zion and the word of Hashem from Soncino.”

(The original source of this famous maxim regarding Soncino is from this colophon).

Owners’ signatures and censor stamp at the end of the sefer. In the present copy, Leaves 56-58, which were torn out of most copies of this sefer, are marked in many places with the censor’s dark ink, yet all erasures were restored with ancient Italian handwriting and the pages were reinforced with paper filler. Several other pages are either reinforced or with minor stains, but otherwise this treasure is a complete copy in excellent condition, bound in a new ornate antique-style leather binding with a leather and metal clasp.

Eternal Jewish Texts
This historic Jewish treasure has survived 536 years of pogroms, censors, the Inquisition, wars and public book burnings. Despite the author’s sharp criticism of Christianity, this Sefer Ha’Ikrim upon the fundamentals of Jewish faith, endured as a symbol and emblem of the Jewish nation’s eternity.

Incunabula
Incunabula (plural of incunable) are books, pamphlets, or broadsides printed in Europe prior to the 16th century. The word derives from the Latin term ‘swaddling cloth, ’ connoting the infancy of the printed word. While the incunable period actually stretches from 1455-1500, the first Hebrew presses opened some years later, making the Hebrew incunabula period between 1469-1500.

The estimated number of Hebrew works printed during the incunabula period is approximately two hundred. Today, we know of some 140 titles which are housed in various libraries in the world, albeit many are fragments or incomplete copies.